Posted on April 25, 2011 By ourneverendingstories 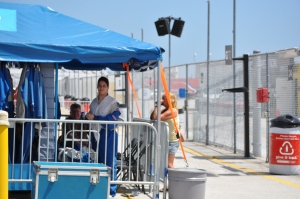 This year’s family trip to Florida was to be an awesome surprise for my 27-year-old son Todd. Todd was diagnosed with autism shortly after entering development kindergarten. Todd like most people with autism has spent most of his life so far in school; in Michigan children with special needs can attend school until after there 26th birthday. His life was pretty mundane he went from school to a part-time job with not a lot of excitement. This day was going to be different!

Five of us were going to the Daytona International Speedway to pick up some souvenirs or so Todd thought. We were going to the speedway to do the “Richard Petty Driving Experience” for Todd and his brother Chris. Todd was to do the ride along at 165 mph, a tall order for a guy who has never able to even ride a bike. Todd has a passion for NASCAR so to ride in a real NASCAR was a dream. I was sure he would chicken out, so we didn’t tell him ahead of time. We were standing in the grandstand watching cars scream around the track and I asked Todd if he wanted to do it. He summed it up in a single word “Yea”! I still was not so sure; maybe I was the one who was scarred?

We took care of all the details and soon we were trackside with Tood being readied for his ride of a lifetime. Me still asking myself will he do it? Todd was going before his brother and was soon out on the track being helped into a NASCAR. He was strapped in and READY! A moment later Todd’s car was screaming around Daytona at 165 mph. There was Todd experiencing 3 laps on this legendary track or his hero’s!!!

To Richard Petty and the Daytona International Speedway we say thank you for making this dream possible for a special guy we all love. All Todd could say was “oh man it was totally awesome”.

3 laps that changed the life of not just Todd but how we all perceive him. Todd won the race he was a champion who lived out a dream at 165!!!

As for me I learned a lot that day. I should never let my thoughts limit Todd’s dreams. If he want’s to ride in a NASCAR or surf in the ocean I will be there to take the photos and support him. This is my amazing son who just happens to have autism.  A perfect gift from God.

A Soliders Deck Of Cards